Known for its tagline ‘Truly Asia’, Malaysia has long since cemented its reputation as one of the world’s top tourist destinations. Other than UNESCO World Heritage Sites like Mount Kinabalu, Kota Kinabalu National Park, Malacca City, and pristine marine parks, – it is also one of Southeast Asia’s most vibrant economies that can be the launchpad for your education and career.

Having been for decades a leader in industrial growth and political stability, Malaysia is also one of the top destinations for those seeking internationally-recognized education. Boasting highly-ranked universities, the Ministry of Education maintains Malaysia’s high standards in keeping with education sectors around the region. The government also grooms top talent through public and private tertiary level institutions as well as accredited skill centers, resulting in the country being a global leader in key industries.

In addition to being at the forefront of quality education, its affordable, cosmopolitan cities provide rich cultural immersion and memories that can last a lifetime. Having the capital city of Kuala Lumpur ranked as the second most affordable student city has no doubt helped.

In Malaysia, experiences, lasting friendships and opportunities are abundant. Education in Malaysia will provide you with the tools to kickstart your future.

One of the main attractions Malaysia holds for foreign students is ‘affordability’. The major cost considerations when it comes to a foreign education are course fees and living expenses.

Kuala Lumpur has been named the world’s second most affordable student city by QS Best Student Cities 2018. This is mainly because the costs of living and tuition fees in the local currency are at least half if not two-thirds cheaper compared to countries like Australia, United Kingdom, Singapore, and Canada.

Annual tuition fees in Malaysia are from USD 4,000 – 6,000, whilst living expenses would be circa USD 400 – 700 per month. By comparison, tuition fees in Singapore would cost USD 7,000 – 10,000 and living expenses are at least twice as high. Only in Malaysia can you strike that balance between uncompromised quality and unmatched affordability – receiving a world-class education and living in comfort yet without the hefty price tag.

Although Bahasa Malaysia is an official language of this country, English is widely spoken in Malaysia as a second language. Most courses at universities are taught in English and it is possible to live in urban areas of Malaysia by speaking only English. Communicating inside and outside the campus is easy, especially once you have also picked up Malaysian English habits like ending your sentence with ‘lah’!

Made up of ethnic Malay, Chinese, Indian, and other indigenous ‘Bumiputera’ groups, Malaysia is also known for is a diverse, multicultural society.

In fact, in the Bornean states of Sabah and Sarawak, there is a myriad of indigenous ethnic groups with their own unique language, culture, and heritage. Interacting with the different ethnic groups of Malaysia can expose you to a wide range of lifestyles, religions, and communities. This melting pot leads to students gaining invaluable experience unique to Malaysia and possibly learning life skills such as picking up a new language or cultivating new friendships.

Students also gain a global perspective on working, interacting and living with people from different cultures. This perspective helps inculcates values like hard work, resilience, and tolerance, ultimately creating individuals who are able to adapt to any environment and contribute their vast experience to any organization they join.

Known for its tagline ‘Truly Asia’, Malaysia has long cemented its reputation as one of the world’s top tourist destinations. An eco-tourism hotspot, the country is home to an estimated 20% of the world’s animal species as well as four UNESCO World Heritage Sites. Amongst them, Kinabalu National Park boasts one of the highest mountains in Southeast Asia. If you are into hiking or simply enjoy looking at the Milky Way in the quiet of the night, this place is for you.

The Malaysian landscape (link to page things to do) is as varied with pristine beaches lining its coast and its biodiversity-rich rainforest offers many adventures to those who seek them. If you are a scuba junkie, islands like Sipadan are perfect for swimming around some of the most colorful coral reefs, fishes and other rare marine inhabitants.

Malaysia is strategically located as the tourist hotspot in Asia. During semester breaks, you can travel with ease locally (link to things to do) like Langkawi and Redang, or regionally to places like Bali, Phuket, Krabi, and Hanoi. Flights from Kuala Lumpur to Bali take only 3 hours, whereby Krabi takes merely 1 hour 30 minutes.

You can travel to further reaches of the world quickly and rather cheaply. A 5-day trip to Korea including Seoul can be as low as USD 750. A return trip with a 3-night stay to Tokyo from USD 350. Visiting your Indonesian friend’s family while enjoying Bali’s beaches? It can be as low as USD30 for a return trip!

Malaysia is ranked the third most peaceful country in the world by the Institute for Economics and Peace (IEP) in their 2018 Global Peace Index. It boasts being one of Southeast Asia’s most vibrant economies, which is the fruit of decades of industrial growth and political stability. The government has, over the years, successfully implemented a successful development and industrialization of the nation. Today, Malaysia is a confident and vibrant entity that is stable, secure, increasingly prosperous at home and at peace with its neighbors, all of which are strong foundations to becoming a high-income, innovation-based society. 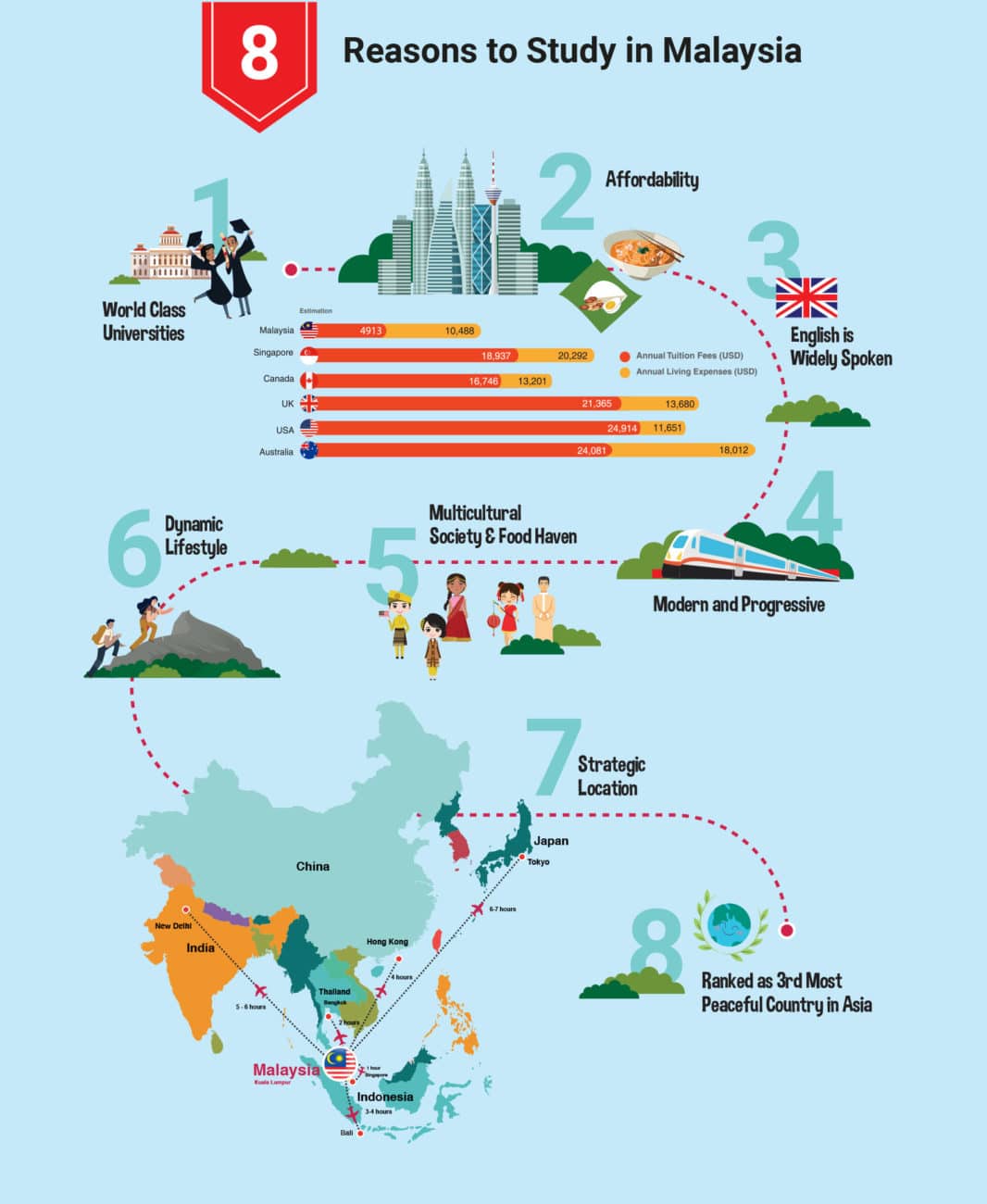